A quote from Bertrand Russell goes,

“Never argue with an idiot. They drag you down to their level and beat you with experience.

In the modern world the stupid are cocksure while the intelligent are full of doubt.”

I confess I have probably been the idiot more times than I am comfortable with.

I recently came across a Facebook post that was mostly just the repeat of a meme that I had seen many times before.  This particular post is usually put up by my religious friends, with an inferred point that education, especially public education, is indoctrination.  More to the point, education is anti-Christian because it is usually of non-biblical(government) origin.  This meme frustrates me a great deal for a few reasons.

First, its posting promotes the idea that education is wrong, and implies that ignorance is preferable to “government education”, and/or that the Bible is the sole means of education.

Second, it continues to foster the trope that the younger generation cannot think for themselves, that at best, they are misguided idiots who cannot possess independent thought or valid knowledge.

Third, it encourages the belief that an uneducated opinion is as valid as an educated one.  You see examples of the third most often in areas of science, such as vaccination, but it is liberally applied elsewhere.

I agree that education is indoctrination, that is pretty much a basic mechanic of teaching, whether the subject matter is of a spiritual or non-spiritual nature.  Students learn by copying the teacher, memorizing their lessons, regurgitating their canned knowledge and then ultimately, applying those lessons learned.  From that application comes self-awareness and a better understanding of the subject.  That understanding usually only comes with time and experience.  In the interim, the diligent student can often inherit many of the same attitudes as the teacher, either intentionally or unintentionally.  With that said, indoctrination is far from being exclusively the province of secular teaching.  Catechism, anyone? 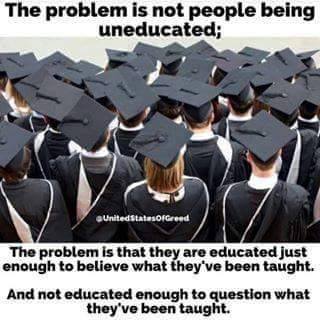 At any rate, my response was ,”That comes with experience, like most things. The problem comes when the uneducated question the educated, because they assume that a lack of education is the same thing as no longer trusting the education you have.”

My intended point is that it takes a combination of a baseline of knowledge and experience in order to question what you have been taught, that ignorance is not a substitute for experience and knowledge when it comes to skepticism.  Unfortunately my response was not taken as well as I had hoped and I was basically informed that any education outside of the bible is essentially useless, barring its direct application to a job, etc.  That the only valid education comes from the Bible and that anything else is essentially of a worldly nature, and therefore inferior.  More so, it was stated that I was saying that uneducated people were inferior to educated ones, and that only those people who had gone to school/college were of worth or could have an opinion.

I was not anticipating that particular viewpoint as I had thought that my point was clear enough.  I was wrong.  My initial rebuttal, indeed my only rebuttal in that particular discussion, was pretty poor in its explanation, and only lead to additional disagreement, along with some general name calling and the intimation that not only was I incredibly rude and insulting, but also an idiot and a false prophet.  Fair enough.  I find I get called all sorts of names when I disagree with my fundamentalist friends.  If I haven’t been called Satan or the Anti-Christ at least once a month, or so, then I haven’t been on Facebook.  Of course, anyone that knows me and their Bible knows that both those names, as applied to me, are hardly accurate as I am far from beautiful.  But I digress.

I ended the discussion on Facebook there.  The discussion was not healthy and my continued involvement would only have caused a considerable rift among people I love and respect.  I believe that is the right thing to do in that situation.  As an intellectual, skeptic and a person of faith, however, I am left feeling let down and frustrated.  The chance to discuss these things in an honest and open manner, to challenge conceived notions and follow the arguments to their conclusion is not something I want to pass up.  And yes, my ego is involved, as well.  Of course I believe I am right, and that urge to prove it is strong.  But not so strong that I would want to cause the loss of friendship, or to not examine my reasons for thinking as I do.  Hence the reason for this post.

I chose the Shorter Whitman because of his work, "Song of Myself" and because of my self-deprecating sense of humor. I am under no illusion that I can write successful essays or poetry, but I have been known to write them anyway.

View all of Dan Granot's posts.